The Bankruptcy proceedings involve hundred thousand of businesses per year around the world.
They increased a lot since the financial and economical crisis of 2008 started.

We can distinguish 2 types of bankruptcy proceedings:

What to do when your client is placed in bankruptcy proceedings ?

Following the decision to open bankruptcy proceedings (see diagram below), liabilities (debts) are frozen and an administrator is appointed to manage the assets and liabilities of the company.

The insolvency proceedings shall suspend all proceedings (judicial recovery) conducted by creditors to get paid even if they have obtained an enforceable title!

Declaration deadline: you usually have a period of two months (depends on countries) of the trial date to send your declaration of debt. .

Feel free to personally contact the administrator to determine your chances of recovering your claims and to raise awareness about your business financial situation. He will seek to prevent further failures due to the domino effect described below.
Although the purpose of these procedures is to preserve distressed companies, their consequences affect hundreds of thousands of businesses whose activities may be disrupted and the financial situation worsened due to these failures.

It is for this reason that we regularly see the so-called "domino effect".

It is vital for companies to protect themselves from possible failure of one of their customers.

The bankruptcy is a collective procedure in which is placed a business when it is insolvent and in order to reorganize the company and recover the activity is possible. Otherwise, the liquidation of the business is made.

In both cases, the procedure freezes the liabilities (debts) and stops all legal actions undertaken by creditors against the debtor. 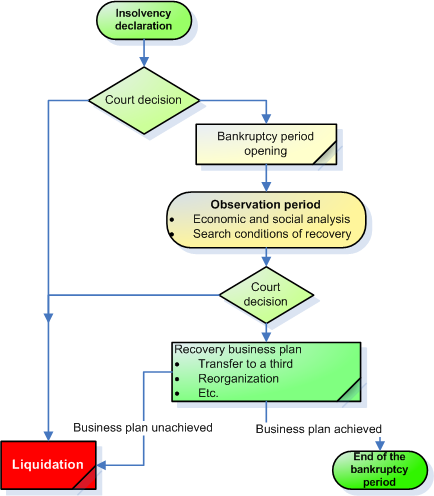 Over 90% of companies declared insolvent are liquidated.

Rare are those who arrive at the end of the recovery plan and manage to repay debts incurred during insolvency.

When they succeed, it is in most cases after several years.

Creditors are in all cases fully impacted by the financial cost generated by unpaid.

Creditors are often required to waive their due in order to allow the recovery plan success.

In case of liquidation, the administrator sells the business’ assets (he sells everything the business owns) to pay off as much as he can employee liabilities and prioritaires creditors (taxes).

Suppliers have very little chance of being compensated.
Next step : Credit Management →