The overview of the risks for export is large and is not readily identifiable without use of specialists. Credit risk, political risk, currency risk ... etc.. are accumulated and may result in non-payment of bills of the exporter.

One of the solutions to cover its receivable with foreign buyers is the use of credit insurance.

In the business context engaging the seller on the medium / long term, the need is to cover risks throughout the project duration, which does not allow the traditional credit insurance.

Indeed, credit insurance provides a revocable guarantee, that is to say, which can be canceled at any time unilaterally by the insurer with notice of a few weeks or a few months.

The seller may therefore find themselves in a situation where he signed a contract for 2 years and on which he received a guarantee of its insurer when signing, guarantee which was then terminated by the insurer two months later when no delivery has taken place yet.

The seller is not covered on his case while the termination of the guarantee, after a reassessment of the risk by the insurer shows that the probability of outstanding is high.

This type of insurance provides a potentially broader coverage than traditional credit insurance and is irrevocable for the duration of the case. The insurer may not withdraw any circumstances (major political event, failure of the purchaser ...).

If a conventional insurance provides cover on a buyer, the single risk covers a specific case and it is totally dedicated to it. The insurance policy is created specifically for the case and is therefore adaptable and unique (hence the name "single").

The amount of the guarantee may vary from month to month based on the outstanding receivable of the seller. The premium payable will be adjusted according to the level of periodic guarantees.

What risks are insurable ...?

It is necessary to differentiate the risk to be insured and the origin of the risk. Indeed, the single risk are customizable and can guarantee against risk occurring only for certain causes. For example, it can be defined as the risk of non-payment is guaranteed for commercial reasons (failure to pay the buyer) only, or for political reasons (occurrence of a civil war, coup ... etc..) , or both.

The types of risk covered obviously affects the premium rates charged by the insurer. It also depends on the risk assessment.

This is the risk to the seller that the case be stopped when he began to produce equipment under the contract and he has not yet delivered and invoiced. The risk is not about debt but on outstanding production if they are specific, can not be resold to another customer.

Manufacturing risk shall be assessed on a monthly basis throughout the case.

Risk that invoices are not paid by the customer. This risk has a direct impact on the income statement and on the cash of the seller. It is the main risk to be covered.

Credit risk calculation: Sum of invoices issued but not paid.

Risk of unfair calling of bonds

In the business world, buyers request very regularly or systematically to get bonds in order to have a guarantee if the seller has failed in its obligations. If this is the case buyer calls the bond and he is compensated by the issuing bank.

There are several types of security: advance payment, good performance, retention... etc. They may be conditional (subject to triggers) or on demand (without the buyer having to provide any justification).

The risk to the seller is that the buyer uses the bond when it is not justified.

It is possible to be insured against the risk of unfair call of bonds.

We can distinguish two sources of risk. It is possible to apply for coverage to insurers on one or the other, or both. Each has a cost that is added to the other if the seller wants to get a guarantee on the two typologies.

It appears an insolvency situation (bankruptcy proceedings) or default (default off collective procedure) if it is a private buyer.


Any failure of a public purchaser is considered political risk.

Single insurance risk are dedicated to a particular business case. A policy is in place specifically for a case unlike a credit insurance policy which can cover the entire receivable of the insured.

In addition, most insurers providing the single risk require to go through a broker to get quotations.

The seller makes a request to a broker stating the case to cover, who is the client, the country of production of the case, the amount of coverage desired (it is not linear over the duration of the case) ,which risks to cover for what causes.

Each broker has a standard document summarizing all the information necessary for an indicative quote. 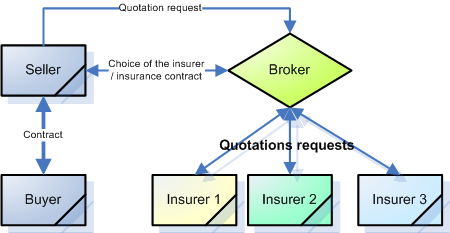 The expertise of the broker intervenes in the choice of insurers to which it sends the request (each has its own characteristics and specialties) and in the negotiation of terms of the policy including premium rates. The principle of single risks for brokers is to make tailored offers for each case compliant with the needs of the seller.

Once the quotations received, the broker shall communicate to the vendor who can discuss the terms with the broker who is responsible for defending its interests with the insurer.

Some insurers are accessed directly without going through a broker as Unistrat or Euler Hermes.

Insurers are sometimes limited in their scope of action because they need to have an official license for each country in which they give a guarantee (the country of the insured). Other restrictions such as embargoes or economic sanctions reduce the possibility of some insurers and certain brokers.

Who are single risk insurers?

The main ones are the private insurers of Lloyd's syndicate. They have a very long history of political risk management since the 17th century. They are developed with the trade of the British Empire in the first place and with the growth of international trade.

The amazing story of the bell Frisky of the Lloyd's

In 1793, the British fleet captured the French frigate "La lutine" during the siege of Toulon. Reset by the English, it conveys in 1799 a cargo of gold and silver worth a million pounds.

She sunk near the Dutch coast and Lloyd's wholly indemnify the owners of the cargo had taken out insurance with them. It is now the symbol of these insurers that, it is true, tend to have more appetite for risky files that many of their colleagues.

The bell is held in the main building of Lloyds in London.

More and more insurers are emerging due to the growth of this market. Thus, two new insurers open their doors in 2014, bringing to 46 the number only to London. Paris and Singapore are also places with strong growth.

This market is a niche in which the seller's reputation is important. It is also dedicated to the business of a significant amount.

The establishment of such insurance policy requires sharing significant information between the insured and the insurer which will require various documents including the contract before committing. Once the police signed and implemented, the insured pays the premium and the case began.

It is necessary to drive the single risk throughout the duration of the case for two main reasons:

The insurer and the insured become partners as soon as the police is signed. It is in the interest of both parties to share information on the progress of the case in full transparency. If gray areas or undisclosed events are highlighted at a loss, the insurer will become increasingly suspicious and may eventually disengage from its indemnification obligations.

A single risk policy is controlled and managed throughout its full duration time. Obtaining coverage and the establishment of the policy are the first steps of a process that ends with the payment of the final invoice by the customer.
Next step : Collect your invoices →